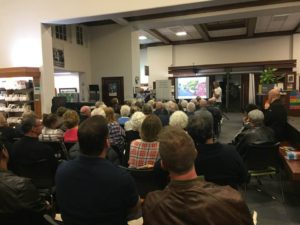 An audience of 70+ in attendance.

The Future for Remuera

Adrian began by thanking everyone who attended his NW Christmas parties and gave a brief history of the event.

a) Clonbern Road carpark. Adrian presented an overview on the carpark’s history and why Council/Auckland Transport had deemed it unsafe for vehicles to park on the upper level.

Auckland Transport has refused to accept liability after concerns of falling concrete and water damage had compromised loading safety.  AT had not engaged engineers to undertake  the necessary tests to back-up the safety claims. Adrian (backed by Foodstuffs) organised tests himself and it was concluded that the upper level could withstand loadings (and more) and negotiations have begun with the carpark owner, Panuku, to lease it and take over the liability concerns.

Adrian also talked about developer Greg Wilkinson’s ownership of both sides of the Village Green. Mr Wilkinson is considering developing the quadrant like a Ponsonby Central, with a mix of boutique businesses and eateries. Ideas are still in the visioning stage.